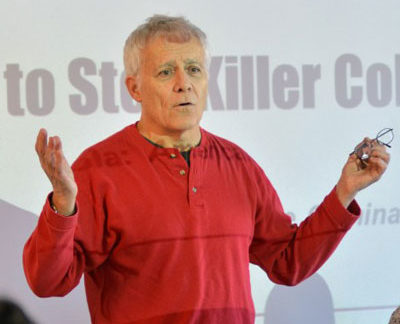 Ray Rogers is founder and director of New York City based Corporate Campaign Inc. (CCI), which has championed labor, human rights and environmental causes for four decades. He graduated from the University of Massachusetts in 1967 and spent two years working in Tennessee as a VISTA volunteer. From 1976 to 1980, while on the staff of the Amalgamated Clothing and Textile Workers, he devised and led its pioneering Corporate Campaign against the notoriously anti-union J.P. Stevens & Co. on which the Academy Award winning film “Norma Rae” was based.

The U.S. Chamber of Commerce, and other big business interests have launched unsuccessful efforts to outlaw the strategies and tactics Rogers coined a “Corporate Campaign.”

The Boston Herald described Rogers as labor’s most innovative strategist and “one of the most successful union organizers since the CIO sit-down strikes of the 1930s.” Time magazine said Rogers has “brought some of the most powerful corporations to their knees, and his ideas are spreading.” Business Week described Rogers as a “legendary union activist” and the Financial Times called Rogers The Coca-Cola Company’s “fiercest foe.”

In 2014, Ray Rogers, following in the footsteps of previous recipients including Howard Zinn, Fr. Roy Bourgeois and Rev. David Dyson, was presented the White Dove Award in Rochester, NY:

Taking on Corporate Abuses by “Confronting Power With Power”