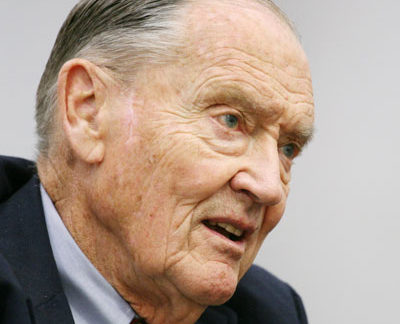 The founder and former CEO of The Vanguard Group

The founder and former CEO of The Vanguard Group

John C. Bogle, 87, is Founder of The Vanguard Group, Inc., and President of Vanguard’s Bogle Financial Markets Research Center. He created Vanguard in 1974 and served as Chairman and Chief Executive Officer until 1996 and Senior Chairman until 2000. He had been associated with a predecessor company since 1951, immediately following his graduation from Princeton University, magna cum laude in Economics. He is a graduate of Blair Academy, Class of 1947.The Vanguard Group is the largest mutual fund organization in the world. Headquartered in Malvern, Pennsylvania, Vanguard comprises more than 160 mutual funds with current assets totaling more than $3.4 trillion. Vanguard 500 Index Fund, the largest fund in the group, was founded by Mr. Bogle in 1975. It was the first index mutual fund.

Fiduciary Duties as if shareholders mattered

Fiduciary Duties as if Shareholders Mattered