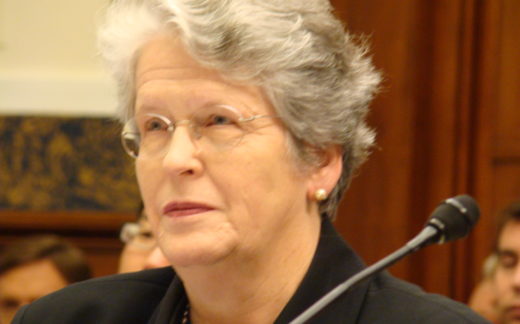 Joan Claybrook is an American lawyer who served as President of Public Citizen from 1982 until December 9, 2008. Previously, she was head of the National Highway Traffic Safety Administration (NHTSA) in the Carter administration from 1977 to 1981.

While working in Washington, she met Ralph Nader, and the two became close friends as they both worked on improving highway and auto safety. In 1966, she teamed up with Nader to successfully lobby for passage of the nation’s first auto safety laws – the National Traffic and Motor Vehicle Safety Act and the Highway Safety Act. These acts empowered the government to establish safety standards for new vehicles and issue recalls for defective vehicles and parts.

Prior to her time with NHTSA, Claybrook ran Congress Watch, worked for the Public Interest Research Group (PIRG), the National Traffic Safety Bureau, the Social Security Administration, the Department of Health, Education, and Welfare. She earned her J.D. from Georgetown University Law Center in 1973 and currently serves on its Board of Visitors. She also holds positions on the boards of Consumers Union, Citizens for Tax Justice, Trial lawyers for Public Justice, Advocates for Highway and Auto Safety, the Goucher College Board of Trustees, and the California Wellness Foundation Advisory Board.

How Professions Can Advance the Public Interest